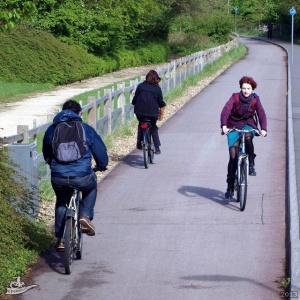 An east/west walking and cycling route linking Adams Road with the West Cambridge site and Coton. The eastern section is extremely busy because of the extremely high modal share of cycling between West Cambridge site and the city centre. Current statistics (2019) indicate nearly 500 people cycling here per hour at busy times. The path is currently partly obstructed at the eastern end by a dangerous chicane made out of bricks. Evidence of repeated collision with the dangerous chicane is regularly available as the bricks are corroded from the force of people hitting them. The University occasionally sends someone to fix it up again. As the West Cambridge site expands (planned to double in size) this path will become busier and busier. The West Cambridge site outline masterplan proposes to remove the chicane and straighten out the junction by giving cycling priority over cars. 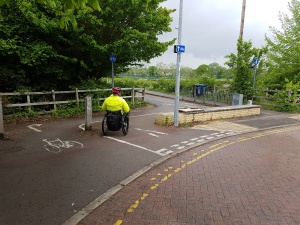 A man with a handcycle has to use the 'wrong side' of the path entryway because of the sharp and difficult bend. You can also see how the wall has been partly demolished from the force of many collisions. 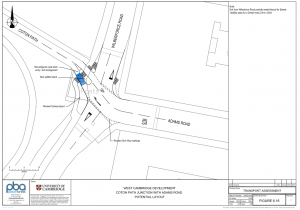 The route (and the junction plan) is under threat from the Cambourne busway, which may uproot the path or cross it and create dangerous conditions at the Adams Road junction.