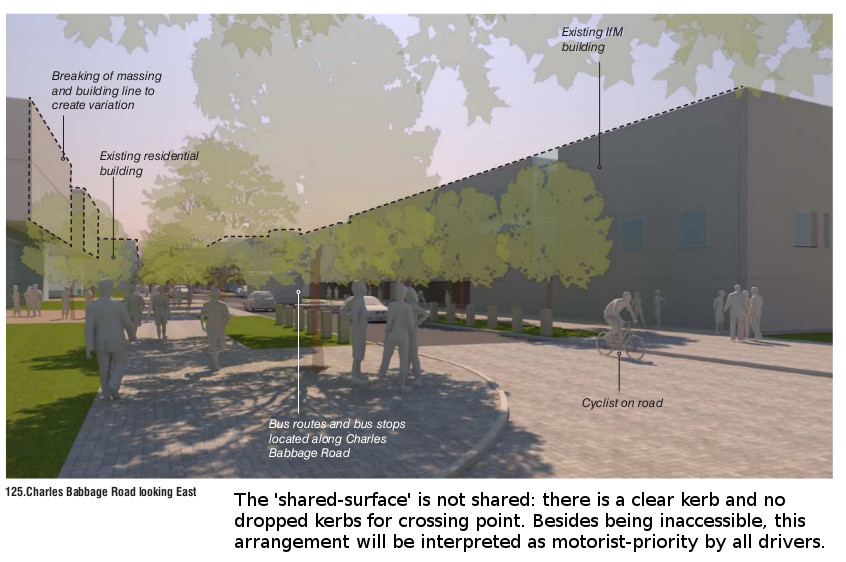 University of Cambridge has released new revisions to the 16/1134/OUT planning application for the West Cambridge site. The documents are rather long so we have looked through the documents, extracted relevant sections, and made notes on objectionable things.

The previous version of the outline planning application had segregated cycleways. Many of these have been removed from this version of the plan. On-site cycling provision will be on-road mixed with motor vehicles for JJ Thomson Ave, Charles Babbage Road and Ada Lovelace Road. JJ Thomson Ave may have some shared-use paths but they will have the same problems as today.

Charles Babbage Road and JJ Thomson Ave will host at least 9 buses per hour in each direction, as well as various shapes and sizes of delivery vehicles. This violates the sustainable safety principle of separating human beings from moving heavy vehicles. Also, there does not appear to be any significant form of traffic calming mechanism because vertical measures cause vibrations that may disturb physics experiments. At junctions, the proposed ‘shared-surface’ crossings are not actually shared surfaces, they are split-level with dropped kerbs: no different than any other motorist-priority crossing except for having fancier paving slabs.

Off-road routes such as ‘The Green’ may offer some additional routes in the future, if and when they are completed, but there are conflicting goals for this route. It will be a ‘shared-use path’ and there is at least one reference that claims ‘The Green’ is for ‘slow-moving cycling’. This is unclear and seems to denigrate the use of ‘The Green’ as a main cycle route, capable of carrying tens of thousands of people cycling per day as expected in full build. Therefore that leaves Charles Babbage Road to handle the load, with no dedicated cycling facilities and mixing people cycling with heavy and long vehicles, which can only lead to problems.

Off-site proposed improvements range from ineffective to outrageous, and in some cases the proposals seem to completely forget the existence of people walking and cycling. There is one good proposal, which is the Coton Path / Adams Road junction finally getting fixed to be suitable for the amount of cycling traffic it handles.

These design proposals for JJ Thomson Ave, Charles Babbage Road, etc are in contradiction to the 2021 Transport Strategy, which calls for ‘segregated cycle tracks’ on site roads.

As well as the original revised planning application PDFs (combined and compressed for convenience): 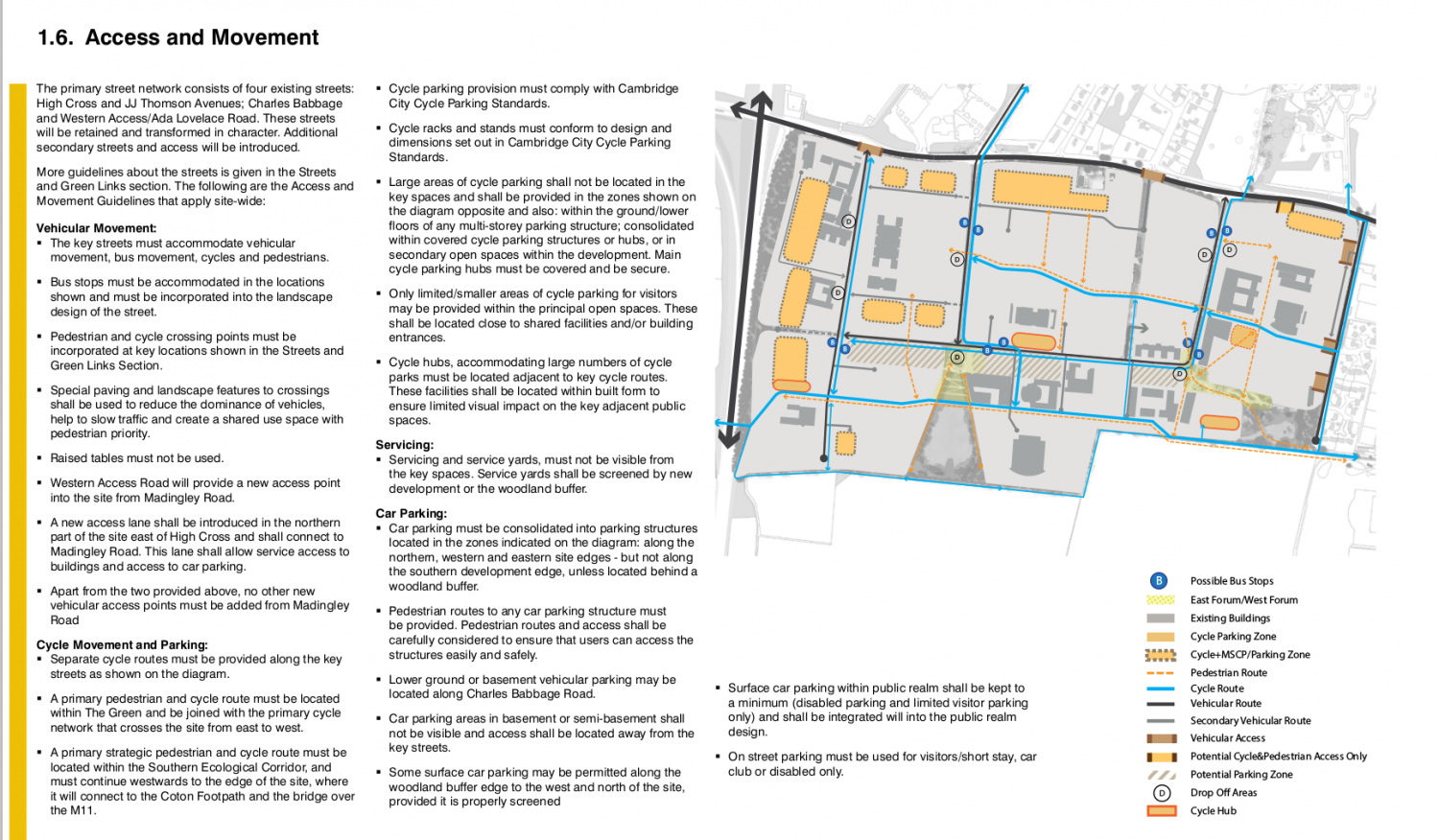 The proposed designs are of poor-quality and do not meet modern design standards or the University's own internal standards for cycling and walking provision. They rely on the use of shared-use paths which are totally inadequate for high volumes of bursty undergraduate traffic where peak hourly rates along some proposed shared-use paths would exceed 1000 cycles per hour. Segregated walking and cycling facilities are required for such links. The vehicular carriageway is unsuitable for cyclist usage due to the high volume of busses and HGVs, and the high speed of these vehicles as the plans do not propose plausible traffic calming measures. The University should revise these plans to bring them in-line with modern design standards and its own standards.